What Not to Say to Someone with Cancer 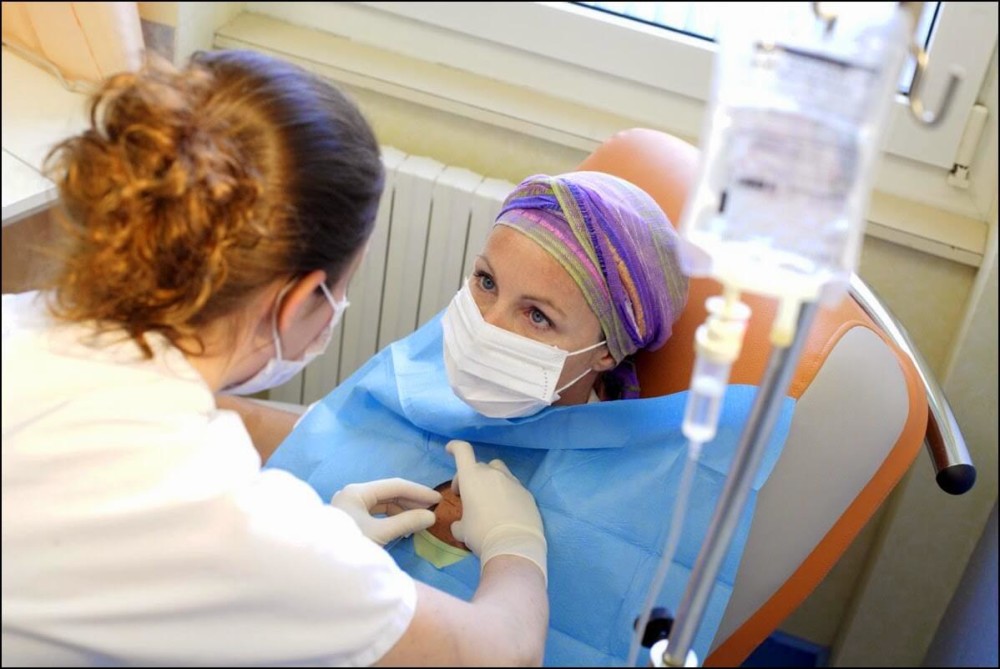 Let me start by saying to all you family and friends out there who find out that your loved one has cancer.... your not alone!!! 45 million new cases of cancer pop up every year. That's right, 45 million, which is a lot of people who don't know what to say to their loved one. The most important thing you can do is mention the situation in some way that feels comfortable for you. You can show interest and concern, you can express encouragement, and/or you can offer support. Sometimes the simplest expressions of concern is the most meaningful. And sometimes just listening is the most helpful thing you can do. Remember the old saying “big ears small mouth” When in doubt, respond to the news from your heart.

As well meaning as you want to be to someone you know, or someone you knew, with cancer , it seems like we are all doomed to say the wrong things. Stan Goldberg, a professor emeritus of communicative disorders at San Francisco State University, says that “it seems as though no matter how good our intentions are, there is no way of asking how someone is during and after treatment''s, not to mention, well after they have gone into remission”. One things for sure, is that you don't state the following things...“Don’t worry about it,” “You’ll be fine,” “We’ll battle this together,” “They’ll find a cure.” . Yes, one would think these things would be calming to the patient, encouraging and positive but in reality, you might as well be saying “I know your sick or dying, but I want to tell you its ok.

A diagnosis of cancer can tie the tongues of friends and family members or prompt them to utter inappropriate but well-meaning comments. Some who don’t know what to say simply avoid the cancer patient altogether, an act that can be more painful than if they said or did the wrong thing. Say your at a family gathering, a happy event, this is where your stuck between a rock and a hard place. You want to recognize your friend or loved one in what they are going through, but you can't ask them how they are feeling, nor can you simply ignore them, so what is one to do?.

Talking to our clients here at AJ'S Wigs, our clients report, that simply asking … WHAT CAN I DO TO HELP WHILE YOUR GOING THROUGH THIS? Words of optimism may work in the short run, but in the long run they can induce guilt if the cancer is more serious and defeats a person’s best effort. We find, that setting up their support system is so much better. Our Patients would rather hear their friends ask them if they can make a casserole for their family or, offer to help clean the house or take them shopping. Others say if someone offered to shop for groceries, care for children, take the dog for a run, or accompany the patient to the doctor. But one thing to remember, is that if you offer to help with things, you have to follow through because if you don't, it can make the patient feel like he/she is a burden.

Other “don't s” for your friend or family member's are:

• Don’t make light of a patient’s physical changes by saying things like “At least you finally lost those extra pounds.”

• Don’t talk about other patients with similar cancers, even if they fared well — no two cancers are alike. It’s fine, though, to ask if the patient would like to talk with someone else who’s been through it.

• Don’t say the patient is lucky to have one kind of cancer rather than another, which downplays what the person is going through. There’s nothing lucky about having cancer even if it’s a treatable cancer.

• Don’t say “I know how you feel” because you can’t possibly know. Better to ask, “Do you want to talk about how you feel, how having cancer is affecting you?”

• Don’t offer information about unproven treatments or referrals to doctors with questionable credentials.

• Don’t suggest that the person’s lifestyle is to blame for the disease, even if it may have been a contributing cause. Blame is not helpful. Many factors influence cancer risk; even for lifelong smokers, getting other cancer is often just bad luck.

• Don’t preach to the patient about staying positive, fit or eating healthy, which can induce feelings of guilt in the patient if things don’t go well. Better to say, “I’m here for you no matter what happens,” and mean it.

• Don’t ask about prognosis. If the patient volunteers that information. It’s O.K. to talk further about its implications. Otherwise, it’s better to stifle your curiosity.

• Don’t burden the patient with your own feelings of distress, although it’s fine to say, “I’m so sorry this happened to you.” If you feel overwhelmed by the prospect of interacting with a person with cancer, it’s better to say, “I don’t know what to say” than to say nothing at all or to avoid the person entirely, who may then feel abandoned and think you don’t care.

Now, for those of you with cancer, don't assume that your friends or loved ones know how to act around you. The best thing to do, is to engage in open and honest conversation about general things and if you want to bring up your cancer, ask them if you can talk about your cancer. In other words, engage in conversations and less in question and answer conversations, and above all, don't have preconceived ideas.

Going back to family and friends,One of the most important things to remember is never give the cancer patient false optimism such as, “You will be fine”. Yes, one would think these are encouraging words, but they are not. It’s also tempting to say that you know how the person feels. But while you may know this is a trying time, no one can know exactly how any person with cancer feels. So, all these don't do's really limit a family members reactions and encouragement, but let's take a look at the do's.

Humor, laughter and the power of prayer. Jokes can be empowering such as:

When the wife comes out to the waiting room, the husband asks her what the doctor said.

The wife answers "he said that you're going to die".

Anyway, you get the idea. No, there is nothing funny about cancer, but humor sure can cure many things and laughter can increase many positive things in the body such as blood pressure and heart rate. The concept that comedy could improve health makes some medical sense. Studies show that anger, depression, and pessimism impair the immune response, increase surgical recovery and wound-healing times, and can even contribute to higher death rates. And what better way to counter a negative outlook than through a dose of comedy? "Humor and distressing emotion cannot occupy the same psychological space,"

Lee Berk, DrPH, a pathology professor at Loma Linda University in California, is among those who have tried. In a series of studies, including one published in the December 1989 issue of the American Journal of Medical Science, he examined before-and-after blood samples from subjects who had viewed humorous videos and from a control group who had not. He found significant reductions in stress hormones and enhanced immune function -- including increased natural killer cells -- in the video-watching subjects.

Asking our Wig Master at AJ'S Wigs , who has been battling cancer for 13 years now, agrees, that the worst thing you can do is to ignore or avoid your family member or friend. Saying something well-meaning but kind of stupid is not great, but it's better than walking away . He states, that the one thing that has always bothered him (he had colon cancer which went into his testicles), is when people say, “Hey, your lucky it went down instead of up into your other organs”.Yes, he knows he is lucky that it didn't go to his lungs, or bones etc, but for a man, the most emotional thing you can go through is to lose a testicle. To worry that his “intimate” life is over. Bob also stated, that there is always a face behind the mask we give to the public, family and friends. Behind the mask, is a face full of fear and worry.And before I wind down on our last blog of the year, is the famous “what not to say to a cancer patient” (even though so true) is this:

"God doesn't give you more than you can bear." Platitudes, niceties, etc. only serve to make the speaker feel less awkward, invariably making everything more awkward. There is only one thing you should ever say: "I will be here in any way you need me in any way I can, and every few days I'm going to ask if you need something specific, like a cleaning or a meal. Take me up on it or don't, but I'm not offering out of pity; I'm offering out of love."

Most people put on brave faces and unless you have been through cancer, we must be careful as to what we say. As stated above, the best thing you can do, is to show your support. Be there for them and ask what they need from you..

On a closing note for the year, we have covered so many issues in our blogs from Sex and cancer, lyme disease and hair loss (between them they have been shared over 10.000 times), Oh lord not again and You have 6 months to live, get your affairs in order (which have both been picked up nationally), Medical Cannibus and cancer(shared 3000 times) and even talking about how to get paid for your Wigs, we have been proud to cover subject's that most people won't (or don”t) want to talk about. There is nothing we wont talk about if it will help our patients understand life, death or cancer. We want to thank everyone for supporting our blogs and for really taking an interest in them. We look forward in bringing you even more informative and provocative subjects for 2017